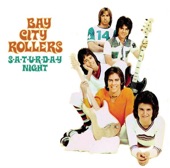 Bye Bye Baby
Artist: Bay City Rollers
Album: S-A-T-U-R-D-A-Y Night, 2005
A couple of weeks ago, on April 20, 2021, singer Les McKeown of the Bay City Rollers died. McKeown was born on 12 November 1955, Edinburgh, Scotland). To commemorate him, we highlight this video of one of the Rollers biggest hits.

The Bay City Rollers are a Scottish pop rock band known for their worldwide teen idol popularity in the 1970s. They have been called the "tartan teen sensations from Edinburgh" and "the first of many acts heralded as the 'biggest group since the Beatles'".

"Bye, Bye, Baby (Baby Goodbye)" is a popular song written by Bob Crewe and Bob Gaudio, a member of The Four Seasons, whose version of the song made it to No. 1 in Canada and No. 12 on the US Billboard Hot 100 in 1965.
The Bay City Rollers version made it to no 1 in the UK, sold a million copies and hit No. 1 on the UK Singles Chart for six weeks from March 1975. It ended the year as the UK's top-selling single.
In Australia and Ireland it also reached to no. 1.
In the Netherlands it reached to #11 in the Dutch Top 40.

In the film 'Love Actually' the song is played by Daniel (Liam Neeson) at his wife's funeral, and by the DJ (Junior Simpson) at Juliet (Keira Knightley) and Peter's (Chiwetel Ejiofor) wedding reception.

AVROTROS is a Dutch radio and television broadcaster, founded in 2014 from a merger of AVRO and TROS. From January 1st, 2014 the name of the merged broadcaster was used in joint programmes. AVRO was founded in 1923 as the Netherlands first public broadcaster. TROS started broadcasting in 1964. Toppop was a weekly AVRO pop program that was aired between 1970 and 1988.

People do what they want to do.