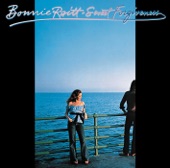 Runaway
Artis: Bonnie Raitt
Album: Sweet Forgiveness (Remastered), 1977
Long a critic's darling, singer/guitarist Bonnie Raitt did not begin to win the comparable commercial success due her until the release of the aptly titled 1989 blockbuster Nick of Time; her tenth album, it rocketed her into the mainstream consciousness nearly two decades after she first committed her unique blend of blues, rock, and R&B to vinyl. Born in Burbank, CA, on November 8, 1949, she was the daughter of Broadway star John Raitt, best known for his starring performances in such smashes as Carousel and Pajama Game. After picking up the guitar at the age of 12, Raitt felt an immediate affinity for the blues, and although she went off to attend Radcliffe in 1967, within two years she had dropped out to begin playing the Boston folk and blues club circuit. Signing with noted blues manager Dick Waterman, she was soon performing alongside the likes of idols including Howlin' Wolf, Sippie Wallace, and Mississippi Fred McDowell and in time earned such a strong reputation that she was signed to Warner Bros.
Debuting in 1971 with an eponymously titled effort, Raitt immediately emerged as a critical favorite, applauded not only for her soulful vocals and thoughtful song selection but also for her guitar prowess, turning heads as one of the few women to play bottleneck. Her 1972 follow-up, Give It Up, made better use of her eclectic tastes, featuring material by contemporaries like Jackson Browne and Eric Kaz, in addition to a number of R&B chestnuts and even three Raitt originals. 1973's Takin' My Time was much acclaimed, and throughout the middle of the decade she released an LP annually, returning with Streetlights in 1974 and Home Plate a year later. With 1977's Sweet Forgiveness, Raitt scored her first significant pop airplay with her hit cover of the Del Shannon classic "Runaway"; its follow-up, 1979's The Glow, appeared around the same time as a massive all-star anti-nuclear concert at Madison Square Garden mounted by MUSE (Musicians United for Safe Energy), an organization she'd co-founded earlier.
Throughout her career, Raitt remained a committed activist, playing hundreds of benefit concerts and working tirelessly on behalf of the Rhythm and Blues Foundation. By the early '80s, however, her own career was in trouble -- 1982's Green Light, while greeted with the usual good reviews, again failed to break her to a wide audience, and while beginning work on the follow-up, Warners unceremoniously dropped her. By this time, Raitt was also battling drug and alcohol problems as well; she worked on a few tracks with Prince, but their schedules never aligned and the material went unreleased. Instead, she finally released the patchwork Nine Lives in 1986, her worst-selling effort since her debut.
Many had written Raitt off when she teamed with producer Don Was and recorded Nick of Time; seemingly out of the blue, the LP won a handful of Grammys, including Album of the Year, and overnight she was a superstar. 1991's Luck of the Draw was also a smash, yielding the hits "Something to Talk About" and "I Can't Make You Love Me." After 1994's Longing in Their Hearts, Raitt resurfaced in 1998 with Fundamental. Silver Lining appeared in 2002, followed by Souls Alike in 2005, both on Capitol Records. A year later, Bonnie Raitt and Friends was released, featuring guest appearances from Norah Jones and Ben Harper among others. ~ Jason Ankeny, All Music Guide
Tampilkan selengkapnya

I do feel my loved ones that have passed on; I feel them looking over my shoulder... So yeah, that's pretty profound, when you're not expecting it, you didn't particularly believe in it and then it just sort of happens too often to ignore.