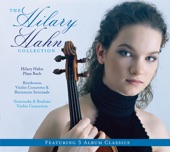 In 1999, Hahn said that she played Bach more than any other composer and that she had played solo Bach pieces every day since she was eight. "Bach is, for me, the touchstone that keeps my playing honest. Keeping the intonation pure in double stops, bringing out the various voices where the phrasing requires it, crossing the strings so that there are not inadvertent accents, presenting the structure in such a way that it's clear to the listener without being pedantic -- one can't fake things in Bach, and if one gets all of them to work, the music sings in the most wonderful way." — Hilary Hahn, Saint Paul Sunday

The first two sonatas and the three partitas of J.S. Bach's six sonatas and partitas for solo violin make considerable demands on performers. However, the Sonata for solo violin No. 3 in C major, BWV 1005 is in a class by itself; it is so challenging a piece on every front that even the usually unflappable Jascha Heifetz used to break out in a cold sweat and suffer nervous bow-shakes when playing it, and it is a work of such consummate mastery, so perfectly planned and balanced, that any flaw in the performance sticks out like a sore thumb. In all fairness, Bach has gone beyond the bounds of reason in this grand Sonata - the violinist is asked to play music that might give a harpsichordist a headache (indeed, Bach arranged the Sonata's first movement for harpsichord) -- but the music is so rewarding that all the toil is worth it in the end. Surely this satisfaction comes in part from the unreal, some have even said mystical, effect of a single string instrument producing such rich, dense music without the benefit of any real bass capability. Like each of the other two sonatas in the solo violin volume, the C major Sonata has four movements. They are: Adagio, Fuga, Largo, and Allegro assai.

Whereas the opening movements of the previous two solo violin sonatas are written in highly embellished, mock-improvisational style, that of the third sonata lacks ornamentation altogether. Instead it evolves from a single, repeating dotted rhythm -- one harmonic layer is added and then another, the steady pulsation being interrupted only twice (once near the beginning and once near the end) for the purpose of expanded and enriching major cadences. The Fuga, which, like all the solo violin fugues, is actually a fugue/Baroque concerto hybrid, ranks among the longest fugues, measure-wise, ever created by any composer for any instrument or ensemble. The subject is derived from the chorale "Komm, heiliger Geist" and is turned upside-down midway through the fugue. The splendid Largo in F major has achieved some fame outside the Sonata, while the Allegro assai finale is the same kind of fleet-footed binary-form piece that closes each of the other two solo violin sonatas.
Show more