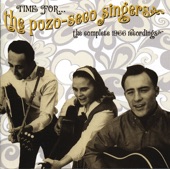 The Pozo-Seco Singers were an American folk music band that experienced national commercial success during the 1960s. They are perhaps best known for the hit, "Time," and as the launching pad for Don Williams' music career.

In the early 1960s, Don Williams and Lofton Kline performed together in the Corpus Christi area as a duo called The Strangers Two. At the same time, Susan Taylor was a student at W.B. Ray High School who had performed with a group of musicians known as the Corpus Christi Folk Music Society. Taylor began a musical association with another student, Michael Merchant. In the fall of 1964, Merchant headed off to college, leaving Taylor behind to start her senior year of high school. Taylor met Williams and Kline when the latter were performing at a hootenanny at Del Mar College. Learning that they had compatible musical tastes and harmonized well, they decided to form a trio. Inspired by an oil field term denoting a dry well (Taylor's then-boyfriend was a geologist), they called themselves the "Pozo-Seco Singers."
Show more